Morven and a week with Gillian.....

As the title suggests, Gillian Cowley one of my Summer working students came back for Spring break.  We had a great time with her helping in the barn a great deal and we celebrated her becoming an "old" lady of 15 by going out for crepes and cupcakes which were yummy!

Then it was off to Morven.  This was our first event after coming home from Aiken.  We ended up with Tag in the Intermediate, Nevaeh in the Training, Hope in the Novice and Gillian also in the Novice.

Neal and I were going to be studs and get up early on Saturday and drive down but thought better of it when we had the dreaded 8 AM dressage test so we were able to go down on Friday and enjoy the night there.

Saturday, was a good day with Tag putting in another good consistent test although I think I left some points here and there as he was in the Indoor ring and distracted by the noise outside and some people sitting near the ring.  He show jumped well, having one down and cross country he went around well as well, both of us finishing the course together this time!

I still have more homework to do to find the right bridle for the jumping phases but it seems the dressage tuneups I have been having have been paying off so that is rewarding.

Nevaeh went next and had a lovely test although at the last halt she tripped and had one of those splat moments for a halt...oh well, she was 5th in a big field so I was pleased with her.
She found the show jumping distracting and the cold, windy weather also did not help our girl and we had two down which was disappointing.  She went on to jump like a lion though cross country and I finished with a grin and laughing about her.

Saturday afternoon we headed off to Middleburg for some shopping which was fun.  It is a great town with lots of nice shoppes and I have to say sometimes it is just nice to get away from the barn!

Sunday morning it was time for Gabby and Gillian and they were first to go in their big junior novice division.  I think Gillians test was her best ever and she earned a 28.5 which was great and put her in 5th where she finished with a double clear.
Hope also went novice and her work in the dressage phase will continue but boy, does she know how to jump!  She had a double clear but there were some scoring irregularities that were not corrected until after we left so she was given some time but no worries, she lived up to the family name of "Star."

Here's hoping all of you are enjoying Spring like weather and lots of green grass, 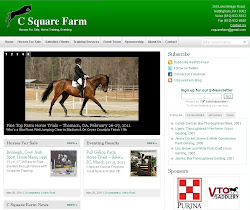 Promote Your Page Too

C Square Farm
Nottingham, PA, United States
An Upper-Level Event Rider, Courtney and her husband Neal run C Square Farm, which has a thriving training and consignment business offering many horses for sale. Courtney competes from Beginner Novice to Advanced with her own horses including several homebreds as well as on the dozens of event horses for sale that are in training with her each year.